Kemburg City is the capital city of the Upper Region of Kemburg and is the national capital of Kemburg. There are approximately 280,000 inhabitants living in the city, making Kemburg City the most populated city in the country. Kemburg City, which is one of the most popular tourist destinations in the whole of the IWO, is the politicial hub of Kemburg, and holds many important governmental buildings including the Supreme Court, the hubs for all of the ministries of the country, the Prime Minister's House and the Houses of Reps and Senators. The city is also the home to the fourth largest airport in the IWO, Kemburg City International Airport (in the south), and Kemburg's only urban metro, the Kemburg City Metro.

Kemburg City was founded in 1746, six years after Kemburg became a British Possesion in 1740. It was built to be the main settlement on the island, and took 4 years to build, construction starting in 1742. Two years after foundation, in 1748, it became the "Capital City" of Kemburg, and the most important Kemburgers moved into the city. The poor of Kemburg knew about the city, even though the very rich were the only that could afford the expensive lifestyle of the town. This resulted in the Poor of Kemburg giving the city the nickname "The Posh City" and it is still known as that today. The ruling monarch of Britain bought a residence there, that didn't have an official name, but was known as the Palace of the Posh to the Poorer residents, and that acts as the only name for it. Kemburg City was also home to some major protests and riots, and the famous protest where the citizens of Kemburg blew up the "Palace of the Posh" in the 1920's which led to Britain giving Kemburg full independence as a Republic.

Soon after Britain gave Kemburg independence, Kemburg City had an economic fall, as many lower class citizens moved into the city, and all the "important" citizens moved to Britain to avoid further protest. In 1940, Kemburg was occupied by Nazi Germany, and Kemburg City was also the capital of Nazi occupied Kemburg. This saw the population drop in large numbers as many fleed to the smaller villages in the countryside, or in the former underground tube stations. The famous battle of Kemburg was held in 1944 in Kemburg City, which saw the Allies (except Britain due to poor relations) win and return the rest of the island to Kemburg from there. After the war had ended, it was given a sum of money to pay for all the buildings that had been destroyed. Kemburg City was modernised with the money, and many citizens returned to the town, including many French and British people.

Over 200,000 people were living in Kemburg by the year 2000, and population grew higher and higher.

Kemburg City is divided into 14 boroughs, or dictricts, divided between north and south. 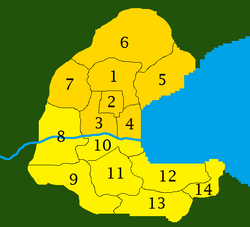 Kemburg City, due to it's status of capital of Kemburg, is the most visited location in Kemburg. It has many tourists from Kemburg and nearby countries, mostly England, France and Belgium. As it is home to the residence of the King and Prime Minister of Brunant, many come to listen to speeches from them. Most tourists tend to visit Sprimont, for it's large shopping district and the famous Sprimont Square.

The city is also home to many sports teams, Kemburg City F.C., North Beach Kemburg, and Tattington Road F.C. being the most popular. These teams, being in the Kemburger First Division, attract visitor crowds of up to 8,000 per match, and up to 50,000 fans from Kemburg City (however this rarely happens). The city has also hosted several WNFA Leaders Leagues, bringing many fans from other nations.

Retrieved from "https://kemburg.fandom.com/wiki/Kemburg_City?oldid=6331"
Community content is available under CC-BY-SA unless otherwise noted.